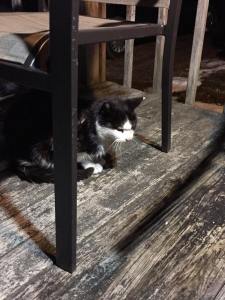 And I want to honor him today as today is his Gotcha Day. This post was originally written on March 9, 2017.

He Showed Up on My Doorstep One Rainy Night

The first time I saw Checky, he was in my back window and I thought he was my old guy, Oreo. But, back then, Oreo wasn’t as social as he is now. And this cat was awfully thin to be Oreo. We had just gotten out of one of the coldest Februaries on record and it was raining this particular evening. I usually don’t feed my feral cats after dark but I went out there to feed him.

As soon as I went outside, I KNEW it wasn’t Oreo. He was all over me like stink on poo and VERY VERY hungry. I fed him and tried to coax him to stay on the heating pad in the shed, but he just followed me to the back door. I snapped this pic to post on social media in case somebody local had lost their cat.

But, I live in the woods. So I know what happened. This poor baby was dumped. His ass was kicked. He was rail thin and sicker than ANY cat I had ever seen.

I found out the next day that he had been staying in neighbor’s garage and living on their covered porch. But they were feeding him table scraps and didn’t vet him or anything. As kind as they were to him, I knew he needed more.

So I SCRAMBLED… contacting the local rescues and NO luck. I finally got a local rescue to agree to help him. It was the ONLY rescue in our area who stepped up! So we set up an emergency vet appointment for the next day and I set out to trap him.

The neighbor called me when they saw him on the porch the following morning, so I went over and got him to take him to his NEW life.

We took him to the initial vet appointment. By the time we got him there, he was covered in diarrhea. The vet tested him for FIV/FeLV… everything negative…initially looked okay but just malnourished and everybody chalked up the diarrhea to worms or a parasite, so he was given all the meds for those problems. I took him over to the rescue. When the director put him in that cage, he looked ABSOLUTELY heartbroken. He didn’t want me to leave. I wasn’t sure what to do because we didn’t know what was wrong with him, and I had Penny, who was diabetic and therefore immune compromised, and Weeny, who had MAJOR “cat issues”.

But I couldn’t get his heartbroken little face out of my mind and heart that night.

When the rescue called me two days later to tell me that she couldn’t keep him, he was just too sick and she was going away and didn’t want to put his care in a volunteer’s hands, I knew I just HAD to take him. He trusted me and I couldn’t let him down.

So Checky became our pet that day. He just didn’t know it yet. And I was excited. I couldn’t wait for that moment that I would return to the rescue and pick him up to bring him home later that week! 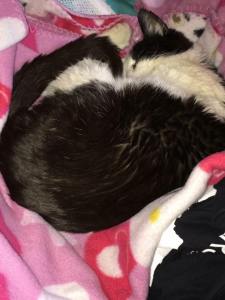 Checky sleeping on his favorite blanket in Mom’s laundry basket.

She agreed to care for him for a few more days to try and get him stable before he came home. She was making little progress. No matter what she did, she could NOT slow down his diarrhea. She bathed him multiple times, which was hard because he was so bony and frail, and she would go check on him in the morning just to find him covered again.

So we took him to the emergency vet. And spent $500 to find out that nothing was wrong in his blood work. We even got him 2nd and a 3rd opinion.

I did manage to slow down his diarrhea but we could not get him hydrated or gaining weight (and I used Young Again Zero, Nature’s Variety Instinct, Fancy Feast…anything high protein/low carb/high quality that he would eat). Then he started peeing over 12 times per day. Yet, his kidney and thyroid values and blood glucose were fine. No matter WHAT I did, I just could NOT get him stable.

And then I made a decision. I could not torture this poor cat any longer with vet visits and medications. I’m not a big fan of over-medicating cats. Enough was enough. I stopped all meds except for the B12 injections and probiotics to try to slow his diarrhea down, kept him well-fed and well-hydrated … the rest was between him and God.

He lived in Mom’s room because we didn’t want to bring him out with Penny and Weeny until we were sure he didn’t have something contagious. He snuggled Mom every night…ALL night. He would go up to her while she was sleeping multiple times and just tap her arm so she would pet him. Every time he saw us he would start “making biscuits”. And he had this sweet little meow that reminded me SO much of my late Tabby.

Then he stopped eating. He wasn’t able to eat because of a mass or infection in his mouth. We spent his last days spoon feeding him baby food, bone broth … I even made him homemade pureed chicken with bone broth. It would take the poor little guy a half hour to finish maybe 1/4 cup of cat food.

I knew he would not survive a dental. No way. Not in the condition he was in. My vet agreed. To this very day I don’t know if it was oral cancer or just an abscess, but since he took several courses of antibiotics, including two courses of Convenia that was still in his system, I knew it likely wasn’t an abscess.

So we made The Decision. And it was the hardest one for me to make. Checky deserved better than getting dumped off and getting his ass kicked by the other cats out there. Then he finally found us and his forever home… only to die. That’s why today is SUCH a difficult day for me.

So, on April 13th I called the vet to come out and help him cross. While we were waiting for the vet appointment, I went into his room to spend some time with him and let him know just how loved he was. We had a radio playing country music (that was the only station we could get on the radio).

While I was spending time with him, “Bless the Broken Road” by Rascal Flatts came on. I’m not a Country music fan but I think the entire world knows this song. And I just cried and held him and told him how much I loved him. I know God sent him to us to know love and comfort and good eats before he died. And I’m grateful God chose us to love him and make him a member of our family, if only for a short time.

Checky passed peacefully, surrounded by love. Even our vet cried when he gave him the injection. Hundreds of people on Facebook, who had been following Checky’s story, cried along with us.

This little cat doesn’t even know the impact he made on this world in his short time in our family.

We buried him in our backyard with all of our other family pets. We promised him that this was his forever home. And that’s exactly what it became.

Fly free, Checky. You left HUGE pawprints on our hearts and we will never forget you. We love you!

Checky, as he realized this was his forever home.