By lots of people.

Because I was feeding feral cats and not doing TNR (Trap-Neuter-Return).

The first time I saw Fluffy, she was eating under my back steps and my feral cat, Tiggy, chased her out and a fight ensued.

I praised Tiggy for chasing the “stranger cat” away (even though Tiggy is a TRUE feral and to this very day, three years later, is still afraid of me!)

Now, knowing what I know, and loving Fluffy AND the kittens she was pregnant with at the time, I feel REALLY bad about that!

Fluffy with one of the ‘suspect’ kit Daddy Cats, Hitler.

The next time I saw Fluffy, she was with one of my regular feral cats, Hitler, who was “showing her around”. He would bring her to eat, show her how to drink out of the bird bath, and would protect her while she was eating.

Me, having NO idea she was pregnant because I ALWAYS spayed my pet cats, thought, “Awww…how sweet. He’s taken this kitten under his wing!”

She WAS just a kitten then. Maybe only 6-9 months old? And she was blowing through SIX cans of Fancy Feast per day, so I figured she was “still growing”.

Well…yeah! I was right about THAT, at least!

They chummed around every day and left together. Every morning he would wait for her to arrive so she could eat me out of house and home!

Imagine MY surprise when I saw two orange and white, 1-month old kittens, in my shed around June 21st?

The next day, we had a thunderstorm blow through that was SO bad, it took three days for the National Weather Service to determine that it was actually NOT a tornado, but a micro burst. This storm knocked out power in MOST of South Jersey for 5-8 days.

During that time, I had brought my cat Penny’s insulin to my neighbors, because they were running a generator out of their garage and it needed to be refrigerated. That’s when I found out that Fluffy and Hitler had kittens. Four, to be exact. Two orange and white kittens, one who looked like Fluffy, and one who looked like Hitler.

I had been HAD. #chump

The neighbors told me that the kittens and Fluffy were living in their barn, and even though they weren’t “cat people”, they thought it was cute watching the kittens frolic in their backyard and watching her teach the kittens how to hunt.

My next thought was that I HAD to find rescue for these kittens. I just HAD to give them a chance. But it was at the height of a VERY bad kitten season. I must have contacted over TEN rescues in my area and nobody could help. And I knew that dropping those kits off at a shelter would likely be a death sentence.

Luckily, my neighbors were totally cool about the kittens living there and eventually the kittens ended up moving over here. I did assure them that I was going to try to find homes for the kittens and neuter everybody else, because the neighbor did mention she wasn’t sure what she was going to do yet but maybe she would take the kittens to a shelter. So I took over to make sure that wouldn’t happen.

In the meantime, I could not find them homes. And my baby cat, Weeny, who was coming up on her 4th birthday, was diagnosed with a rare (for cats) malignant mast cell cancer. We figured it out AFTER it had already spread to her lymph nodes.

After Weeny passed in September, I ended up rescuing the kittens. (Meet the Kits here! Meet the (Former Feral) Kits!

In the meantime, Fluffy and her kits had gone missing in mid-August for three days, at which time my mom and I went into a panic and decided to go for a hike in the ACRES of woods behind our house to try and find them. We didn’t find the kits, but we DID end up with the absolute WORST case of chiggers known to man. Rule #1: Never go hiking in mid-August in the woods in the Wharton State Forest!

Fluffy and the kits came back that evening. AFTER we got chiggers!

Soon after they returned, Fluffy started to distance herself from the kittens. She would eat and hang out in alternate places. I had to put food in other places besides the regular feeding stations I had set up outside. And she was eating enough to choke a horse again..

UH OH…Now I’m smarter. I KNEW what THAT meant.

I was SO terrified of TNR because I was afraid someone would get hurt, or they’d never return again, or someone would die at my hands. But I had to do SOMETHING.

So I made the appointment, talked to my friend Dana, who lent me her humane trap and came over to show me the ropes. I caught Fluffy five days after I rescued her boys.

I was a NERVOUS WRECK. I knew a spay/abort was risky. But it was the end of September. Winter was coming. And I was out of resources to help her new litter. It was a VERY tough decision for me so please don’t judge. I prayed to God and St Francis to forgive me. I talked to MANY people and looked up lots of advice from the experts. And while I was driving Fluffy to AWA, I was apologizing to her and begging for her forgiveness.

From what I understand, cats are not bonded to their unborn kittens. They only become bonded once they give birth. And I could not allow those four kittens to be born and have to tough out Winter while I had no more resources to help them.

We set up Fluffy’s recovery area in my friend Dana’s secure garage, in a secure dog pen, with a little feral cat den, somewhere for her to go to the bathroom, and eat. We had planned on keeping her for at least three days to recover. 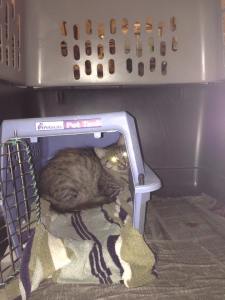 Fluffy, the day of her surgery, when Dana first found blood.

But, Dana called me later that night. She found blood. LOTS of it. And more the next day.

So, I had to bring her back for a second surgery. When I went to Dana’s to pick her up, even though she was hissing and spitting, as soon as she heard my voice, she went from growling to squeaking because she recognized me. That just BROKE my heart. What if she died? I could never live with myself…

I spoke with the doctor at AWA that day and she was further along in her pregnancy than originally thought, and they didn’t suture something inside correctly because there was a lot of blood. They fixed her up, gave her an antibiotic injection, pain injection, and instructed me to hold her at least five days because she lost a lot of blood and was slightly anemic.

I was beside myself with guilt and heartbreak. My very first TNR and I almost killed this precious baby…

BUT…she recovered BEAUTIFULLY. And once I released her, she returned five days later like nothing had happened.

And, after another nine months of her only coming to eat and living somewhere else, and sometimes going missing for up to four days at a time, she decided that she liked it here and would live in my shed and backyard “full time”.

And after another couple of months, she started to rub against my legs. Now, she lets me pet her, but ONLY while she’s eating. And, sometimes she still scratches me when I give her treats.

But, she will also sit on my foot when I’m ready to leave the shed because she does not want me to leave her. And she’s a “social eater”, so I have to stand there, NO MATTER THE WEATHER, while she eats her crunchies. 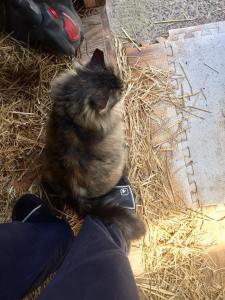 And you thought I was lying about her sitting on my foot so I wouldn’t leave!

She is happy, healthy, and LOVED today. I hope to one day bring her inside, when she is ready, and when her bonded protector, Oreo, passes on. But, she’s living a better life than she probably EVER imagined, and she never has to worry about taking care of anybody else besides herself EVER again!