It’s been one year since Oreo crossed the Rainbow Bridge.

That first anniversary is always the hardest, isn’t it?

We watched you for years as you ran around the neighborhood. Dad would go out on his walks and talk about this super-fast black and white cat on the next street over.

You lived under my neighbor’s barn across the street. Feral. Afraid of human contact.

When I first started feeding in 2014, you would sit in front the barn and feel the ground vibrations so you would know it was safe to cross the street and come over to grab a snack.

Sometimes, I would see you on the heated bed inside the shed the morning, waiting for me to bring breakfast.

I always told you to stay. But you never did.

Sometimes you greeted me with this loud meow that sounded like a cat bird.

If I took even one step too close to you, you would run away.

You protected Fluffy and her Kits before I rescued them. I remember The Kits stealing your food right out from under you inside the shed. So I would meet you outside of the shed with a bowl of food to call your own.

When you were recovering from your neuter in our bathroom in 2015, you started crying at the top of your lungs at 3am and didn’t stop until I released you around 8am 😂😂

But not before you got loose in the bathroom and we stood there for an hour, both too scared of each other to move 😂😂

You were over 10 years old when you were neutered…

You took Trouble, who was just a kitten at the time, under your wing in Winter, 2016.

You spent two years grooming him to be the next Lion King.

You FINALLY officially moved here in Winter, 2016. And, thus, our colony was born.

And you were The Lion King.

The first time I played with you, you were too interested in play to be scared of me.

You danced around my legs for over a month before you got the nerve up to make contact.

It wasn’t long after that I was FINALLY “allowed” to pet you and show you how much I love you.

Your colony lives on.

Your little “seedlings”…Charlie, Junior, Domino, and The Kits…carry your legacy.

As well as your little Lion King “in training”, Trouble, who is sitting right next to me, purring, as I type and I cry.

Your grave and flag overlook the colony that YOU created, protected, and mentored.

At last, you found your FOREVER HOME.

You live on in our colony and in our hearts.

This morning, I heard your signature “meow” in two cat birds carrying on right above us.

I know that was your way of telling me that you are still here.

I hope you know how LOVED and MISSED you are.

Thank you for giving me the chance to make right when other humans failed you.

Thank you for caring for us, our property, our colony and Fluffy and The Kits.

Trouble, March 2017 waiting for a snack on his heating pad.

To see my definition of a “fake” feral cat vs a “real” feral cat, see Meet Oreo.

Trouble came to me JUST before the Blizzard of 2016, when we got pounded by 2′ of snow. The night before the blizzard, just as the first flakes were falling and our new snow thrower was being delivered,  I saw him running around in my back field. I didn’t have time to worry about it as we were feverishly trying to figure out where to put this monster of a snow thrower while it was already snowing at a good clip.

For three days after the blizzard, he was the ONLY cat showing up to eat! I guessed him to be about 4-6 months old at that time, and he was social, but DEFINITELY a loose cannon and DEFINITELY wild.

And I was afraid of him. Especially because he immediately took to head-butting my hand while I was feeding him, but he was a wild one and I didn’t trust him one bit!

He was a holy terror, fighting EVERY cat he could find, including my neighbor’s outdoor cat, Blacky, and literally terrorizing Big Orange, a docile orange tabby cat who showed up here shortly after Trouble did.

On St Patty’s Day 2016, he even sent me to the ER when he bit me. He hadn’t had his rabies vaccination yet, so I figured why not blow $13,000 to get the rabies series? It’s not like I had anything BETTER to do that day and OF COURSE I had thousands of dollars of disposable income to throw around to get sick and feverish from the rabies series!

Trouble’s indiscretions definitely cost him! He would scrap CONSTANTLY with another new young feral tom, Junior. But Trouble is a SMART guy and aligned himself with the Alpha Big Man on Campus, Oreo, for protection and to ensure that our property became HIS!

I finally started to train him to eat out of the humane trap that I use to trap the feral cats to get them neutered and vaccinated, but he was NOT having it AT ALL. This cat would NOT enter that trap no matter HOW hungry he was! I was 8 for 8 with trapping feral cats at this point, and Trouble was going to BLOW my 100% capture record!

But I’m just a LITTLE BIT smarter than Trouble! Just a little… I had my friend Dana’s trap, which has a “back door”, so I started to feed him on the door of that trap in the shed in his usual spot, with a towel over the back of the trap. I figured if I could JUST get him halfway in, I could gently close that back door behind him while he was eating and get him that way!

And it worked! After two LONG months of “training”, I got Trouble in that trap and off we were for his Castration Day! And I didn’t blow my PERFECT record! 9 for 9! HA!

He was actually my most well-behaved feral cat during recovery. Didn’t make a peep. And didn’t growl or hiss or spit at me that next morning once the anesthesia wore off. And he’s VERY forgiving! Because not ONE hour after I released him, was he BACK looking for more food and rubbing up against my legs!

It took this little pistol quite some time to calm down. But, alas, he did. FINALLY. But he IS territorial, bossy, whiny, and still a bit of a loose cannon. But I finally started to fall in love with the little turkey. He just has this way about him that just when you get REALLY MAD at him, he does something super cute and gets all submissive and you just CAN’T stay mad at him!

He assists Oreo with protecting the property. Hence, he has earned the position of Trooper Trouble, again, in honor of my dad, a retired NJ State Trooper. He still scraps, but has FINALLY, for the most part, stopped terrorizing the resident ferals and just focuses his attention on terrorizing any newcomers or anybody who is not in the Core Four (Fluffy, Oreo, Trouble and Big Orange).

Trouble, the day I found the scratch and resulting abscess on his face.

In October 2016, I found him with a scratch on his face and the side of his face swollen up like the Elephant Man. I managed to lure him into a cat carrier and take him to my vet. I have to say, for a cat named Trouble who has EARNED that name, he was better behaved at the vet than my indoor Maine Coon, Penny! And when we got home, he was scared for about a hot second and then enjoyed the special sardine treat I gave him for being such a good boy.

And he’s been thanking me ever since.  Our relationship changed that day. I’m not sure if it’s just because I REALLY became endeared to him that day or what, but I cannot believe that at one point I had secretly hoped he would find somewhere else to hang out than here. I love him as much as all the others, and honestly, he is my mom’s favorite out there!

When he had a pretty nasty URI in January, I learned he gets rather submissive when I scruff him. I was able to pill this cat for 10 days and I syringe him Lysine powder mixed in with broth cat food (Fancy Feast) twice per day, which he actually LOVES. He will still swat, nip and scratch if you pet him the wrong way and is sensitive about his tail being touched for some reason, but he really has become the official Baby Cat out there!

I don’t believe he’s a candidate to be adopted out. He’s one of those cats who is very bonded with his land. He loves his life out there. He’s bonded to Oreo, too. And he’s extremely territorial. Still marks out there even though he’s neutered.

To bring him inside with my males is out of the question. And to adopt him out and have it not work out, and have him lose his territory, is just not a chance I want to take. So I hope and pray he stays out of the the street and he gets to live a long, happy life on HIS terms. Which is how it must be with him. On HIS terms.

Like Red says about Andy Dufresne in Shawshenk Redemption, “I have to remind myself that some birds aren’t meant to be caged. Their feathers are just too bright.” That’s Trouble. 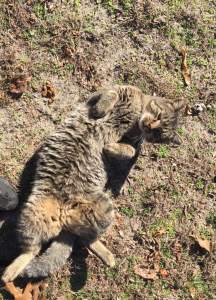 Just when I get REALLY ticked off at him, he pulls one of these little acts!