When I went to meet Weeny (nee Irene), Penny was looking at me with those EYES from her cage and I studiously avoided eye contact with her because I KNEW I was in trouble if I so much as LOOKED at her. I put in an adoption application for Weeny, continued to avoid eye contact, and left Pet Smart.

The next day I brought my folks to meet Weeny. I was living with them at the time and my dad had gotten very close with Tabby in the four years since I had moved back home, so I wanted them to be on board with giving Weeny a much-needed home.

THIS time, all the cats were in the room behind the cages for their “free time”. Weeny was busy playing with the other cats. So, Penny had the opportunity to introduce herself to us and basically THREW herself at us and BEGGED us to get her OUT of there.

She made us an offer we couldn’t refuse. So a SECOND adoption application went in for Penny that day, and we adopted both kitties that week!

Penny was 3 1/2 when I adopted her from Jersey State Animal Rescue. She was one of their show cats and actually won ribbons in the Domestic House Cat Division. If you Google their logo, you will see that unique diamond face at the top of their logo. She is our retired show cat, our poster child, and our little hairy human!

Penny hasn’t had an easy life. She was bullied at the rescue. She was being bullied by one of the other cats the day I decided to adopt her. And she has her issues as a result. She’s a social eater and suffers some separation anxiety. Knowing how she LOVES people, I imagine her life at the rescue was pretty lonely with being bullied and not having as much human contact as she probably craved. They did their best, I’m sure, because they take VERY good care of their cats, but that’s no replacement her very own home and her very own humans.

She thinks she’s one of US and she thinks she OWNS me. She told an animal communicator that she thinks I’m HER pet. Which I already knew! She’s most content next to me (and Mom if I’m not around) and being adored 24/7! She’s charming, congenial, and VERY, VERY patient…until it comes to food!

She’s had her share of health issues over the years. In 2013 she was diagnosed with Feline Diabetes. We achieved remission in just six weeks (read about her journey here Feline Diabetes-Penny’s First Remission). She held remission for 14 months before she had to go back on insulin and also picked up a diagnosis of spinal arthritis along the way. She spent ten months in glucose toxicity/insulin resistance before we got her diabetes regulated. Six months after we got her regulated, she achieved her SECOND remission from diabetes. But, unfortunately, along the way, she was diagnosed with Stage 4 Chronic Kidney disease in February 2016 (more on that to come, as well). 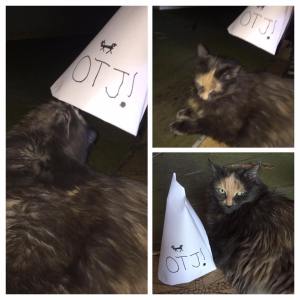 Penny’s SECOND “OTJ Party”…the day she was officially “off the juice” (insulin). She didn’t want to wear her party hat…lol

But that has NOT stopped her! She has been living her BEST life yet since that kidney disease diagnosis! She runs and plays like a kitten, eats enough to choke a horse, and honestly, some days if I didn’t see her litter box or her blood work results, I’d never believe she was so sick. I couldn’t have asked for ANY better quality of life for her than she’s had the past 17 months!

Penny was sent to me to teach me SO many lessons! Not just about cat health, nutrition and care, but LIFE lessons…such as my limitations exist only in my mind, when something is THAT important to me, I’ll FIND a way to make it happen, and that I should NEVER, EVER let external forces get me down. She truly is an angel here on Earth!

I don’t know what tomorrow, next week, or next month will bring, but since I thought 17 months ago that she would only have a couple of months (at best) left, I’m enjoying every last second of this “borrowed time” with her!

“Every Breath You Take” – The Police

UPDATE: Penny earned her Angel’s Wings on November 15, 2017. She spent her last conscious moments squirrel watching on my windowsill while I sang “The Penelope Song” and “Earth Angel” and trying not to cry. If you follow us on Facebook,  you will know that she has made herself known to us in many ways since she crossed The Bridge so I have no doubt she is still here. Penny and I will continue to save the lives of diabetic cats, cats with kidney disease, and other special needs cats through this blog.

Penny’s legacy will carry on… 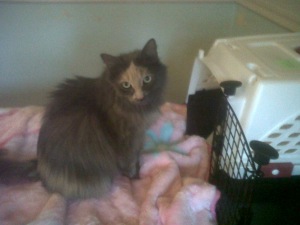 Penny, her second day in her forever home.